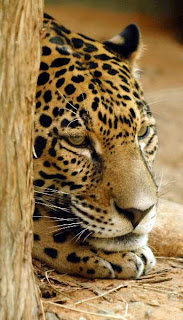 This was part of a 3-story package, but this one was the best.

The tree frogs came in the mail, shipped overnight in a plastic butter dish with air holes and a moist towel to keep them alive.


The jaguar arrived via plane to Chicago, then made the six-hour ride to Evansville in the back of a van driven by Mesker Park Zoo & Botanic Garden zookeepers Stacey Ellis and Jill Remington.


"The director at the time, Dan McGinn, he gave us a hammer and nails and said if we thought she was about to break out of the crate, just hammer the lid back down," Ellis said.


Deciding on an Amazon rain forest theme was only half the task in readying the new multimillion-dollar exhibit at Mesker Park Zoo. Finding the animals to fill it, securing them from other zoos, and getting them here was often a challenge.


The more delicate the animal, the better it probably is to pack it up and ship it overnight, said Erik Beck, the zoo's general curator.

Insects and frogs and even some small snakes can be mailed almost like medical equipment or samples, with labels that say "fragile" and "do not put near excessive heat or cold."


It cost about $30 to mail the new exhibit's giant waxy monkey frogs. Most animals smaller than monkeys can be shipped just like dogs or cats, and picked up at the ticket counter.


Shipping challenge
Many of the animals in Amazonia were picked up in vans, usually by one or two zookeepers looking for a chance to get out of the office, so to speak.


Those that came by air still faced a van ride as well, since only certain airports allow big animals to be shipped by freight.


It cost about $1,000 in February 2007 to ship Beliza, the then 1-year-old, 80-pound jaguar, from Boston to O'Hare International Airport in Chicago, Beck said.


Airport workers offered to use a forklift to move Beliza's crate into the van, but Ellis and Remington thought that would be too rough and scary for the big cat. Instead, they helped a couple of workers lift the crate into the van.


Once they arrived in Evansville, most of the animals were quarantined in the vet building, which underwent a $540,000 renovation.


It had been one big room, designed to hold elephants, with a single air-changing unit for the whole building.


Now there are several rooms with separate air units, so if one group of animals is sick, the illness won't spread. Beliza got her own space - two big stalls with two yards, one of which had a pool.

Zookeepers began moving the animals into Amazonia two months ago. The ones that were due for physical exams, such as the howler monkeys, were sedated before the move.


Beliza was awake for her move, made in a wooden crate that had once been used to transport a warthog.


Zookeepers put it in her stall, then added meat, and later a toy. Curiosity didn't kill the cat, but it did get the best of her.

"We got the door ready, guillotine-style, with a rope, and I acted all nonsuspicious," Ellis said. "She knew something was up. She paced for a little bit, then she went right in."
at March 26, 2014 No comments:

My roommate’s cat is hunting my dog.

Daisy is always watching my little buddy, peeking around the house plant, or lurking in the shadows of the sofa, or staring from her perch on top of the bed. Once, in the middle of the night, she nudged open my door, saw that I was awake, and backed away. And the other morning, as I got ready for work, I heard her sharpening her claws on a scratching post, like Carl readying his weapon near the climax of “Sling Blade.”

The truth about cats and dogs is they can’t be friends. I knew this. But Sophie and I were basically strays, until my roommate from the ‘Burg and his common-law fiancée took us in. I thought our pets could forge an uneasy truce, like when Brisco County had to work with Bowler every week.

And it’s not going to be a fair fight.

At 12 pounds, Daisy’s only a little lighter than my miniature schnauzer — five pounds less, to be exact. I know because my roommates just weighed her at my request, which I’m sure will only make her madder. Daisy is a rescue, adopted after she was discovered on the street, shivering in the snow, cold and hungry, but surviving.

Sophie is also a rescue — I found her online, stranded in a basket of puppies. I’d like to think buying her was akin to sponsoring a hungry Third World child.

Sophie probably started the rift the first day we were here, when she chased Daisy under the bed. She doesn’t know why she must feel like that — why she must chase the cat. But she never posed any real danger.

She’s just a goofy little terrier, bigger than a football, too big to fit in a purse, in accordance with man laws. Years of breeding and evolution have left her with no survival skills except relentless adorability. On a toughness scale from Clint Eastwood to Clay Aiken, she’s about a John Mayer.

She forgot all about the feud, once Daisy was out of sight. She went back to trotting obliviously through the house, thinking about bones or balls or biscuits.

The thing about cats is, they tolerate people, and they’ll eat food from people because it’s free. But they’re hunters, and their thirst for blood is so great, they play with their prey before eating it. Unlike dogs, which are just furry little street bums, cats like to kill.

And when a mini lion takes on a mini schnauzer, I know where to place my bet.

I just watched a thing on National Geographic where seven lions ganged up and tried to kill an elephant. They just dug in and held on…

But I wouldn’t wish it on my little snow pea.

Unfortunately, Sophie’s gonna end up like that elephant. The situation came to a head the other day, when her back was turned.

Daisy crept out from the shadows, padding across the carpet likea ghost in the darkness. When she was inches away, she shrieked and pounced, Montecore-style. She didn’t stop flailing until my roommates pulled her offstage.

From then on, the food chain was back as it should be. Sophie feels the need to stand at a safe distance, in a doorway, when begging for food. Daisy marches through the house like General Sherman in Atlanta.

This story doesn’t have an ending, but like “Sling Blade,” it really only has one logical conclusion.

Daisy just keeps watching Sophie. Watching and waiting, hoping for that perfect moment when she can go in for the kill.