This weekend I was lucky enough to have a world-class artist in attendance at my latest karaoke gig. She's Kelly Toon, which is apparently her real name. You can check her out here.

As I jammed with my partner in rhyme, Travis (I believe we were doing Aerosmith's "Last Child" at the time), she sketched this great caricature: 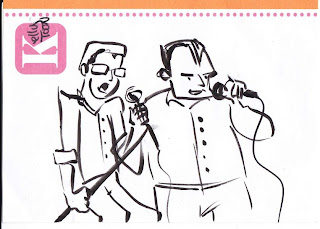 Pretty talented, right? According to her Website, http://kellytoon.com/, you can hire her for professional work including illustrations, airbrushing, face painting and caricatures.


Travis says that caricature is the best thing that has ever happened to him. Pretty sure he just stares at it all day.


Oh! And, since you're dying to know, the rest of our setlist:

"The Other Side" (Aerosmith)


"All My Rowdy Friends Are Coming Over Tonight" (Hank Jr.)


"What It Takes" (Aerosmith)


"Love In an Elevator" (Aerosmith)

Short Stories That Will Rip Your Guts Out

My first semester of grad-school creative writing is in the books (see what I did there?). Here is a list of my favorite short stories I read this time out. Each of these made my jaw (or a tear) drop.
at October 05, 2011 2 comments:

Gosh dang it, this is harder than I thought!

I stopped cussing for Lent--you know, the Catholic holiday where people prepare their souls for Easter by giving up stuff--and it's kicking my behind.

It's hard as all get out to think of stuff to give up, since it's supposed to be something you really love. I'd rather give up nothing than be like my hell-bent friends and give up something silly like broccoli or homework.

Geewillickers, I don't do my homework anyway.

Giving up cussing was my Get Out of Hell Free Card, because not only do I love doing it, it's supposed to be bad for you. It'd be killing two proverbial birds with one proverbial stone.
But I've never realized how daggum much I cuss. I have to stop myself every couple of minutes because -- son of a biscuit eater -- I'm a little south of profanity.

In fact, about two minutes into Ash Wednesday, this guy said he was going to, uh, know my mother in a Biblical way, and I lost control and implied that he was born out of wedlock.

When I realized I'd broken my Lenten promise, I immediately started swearing. I felt like a big wiener.

Since then it's been a constant battle to rinse my salty language, especially when you consider that I pretty much hate everybody and everything.

I've been using the Seven Words You Can Always Say on Television: shoot, heck, dang, darn, gosh, golly and relations.

The other day I sang a great rendition of Kid Rock's "American Bad Tush."

I went into a relapse when I heard Aerosmith's new CD, and I kept saying bad things to the effect of "Tarnation! That's a jolly good song."

They're gonna bleep it anyway.

Lent loopholes say you can partake in whatever you gave up on Sundays, and one girl who gave up cookies even suggested we get together Sunday for "cookies and cussin'."

I might even drop that bloody habit after Lent, and just use PG language.

It's kinda fun to come up with creative ways to express my bitterness at my life choices, and it even helps my chances of not going to the devil's house.

But I'll probably go back to cussing like a sailor that got stung by a jellyfish.