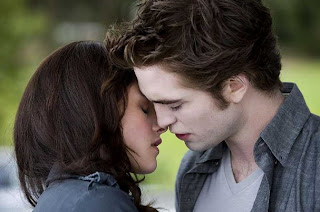 There's a 'New Moon' rising for vampire romance and midnight screenings are expected to sell out
By Jacob Bennett
Posted November 18, 2009 at midnight

Sure, there were dozens of teenagers at the theater last year when Kendall Paul went to see the first "Twilight" movie.

But Paul, 38, of Evansville noticed not everyone at the theater was near the age bracket of Bella Swan, the teen heroine of Stephenie Meyer's wildly popular series of books. Bella explores a forbidden romance with Edward Cullen, the cute vampire who may not be able to resist drinking her blood.

"I just thought it was interesting, you're walking in there and there are a lot of teenagers, and a lot of people there my age, too, who were obviously not there with their kids," said Paul, the executive director of the Vanderburgh Humane Society. "(The story) has struck such a chord for so many people, it's going to last for a while. I think it'll resonate for a long time."

The story might be striking different chords for fans like Paul, who relate to the story through a broader range of experiences, than for the teens and tweens who either will have to wait until the weekend or stay up way past bedtime tonight to see the second big-screen installment, "The Twilight Saga: New Moon." The film opens at midnight on an ever-increasing number of screens at Showplace Cinemas East and Stadium 16.

Mick Stieler, the general manager for Showplace Cinemas, said he expects to sell out all 18 screens at Showplace East.

Both theaters also are showing the original "Twilight" film at 9 tonight.

The series' mix of fantastic elements and complicated relationships is a hook for all ages, including Jayde Loper, 12, a sixth-grader at Lincoln Trail Elementary School in Lamar, Ind.

"Most of my friends, what they like are the vampires, they have crushes on them," she said. "Some of them like the werewolves. Some of them just like Bella. I think she's more mature than she seems. I think that's kind of interesting. I think they like how Bella falls in love with Edward. Some of them can relate to Bella because she's clumsy and some of them are clumsy. She's not perfect, no one is perfect."

The story's forbidden romance has echoes of Romeo and Juliet, although Bella also is courted by her close friend/werewolf Jacob Black, who has his own loyal fan following. Paul and Jayde were both firmly members of Team Edward, but Laurel Szorcsik, 12, a sixth-grader at St. Benedict Cathedral School, couldn't bring herself to choose.

That's very Bella of her.

Paul said those conflicts can remind older viewers of their own teen angst.

"It gives them a chance to be nostalgic about a time when they were young and making decisions," Paul said.

For the story's youngest fans, it gives clues as to what adventures, hardships and relationships might lay ahead (minus the creatures of the night).

"It makes me think of stuff you have to face in life," Szorcsik said. "It's not going to go too well. It's going to make you go through stuff you haven't felt or done yet, but it's probably going to come up in life."

That's some pretty heavy stuff, and one reason why Paul hasn't yet let her daughter Addison, 11, read the books.