Mark Henry and cohorts ready to rumble for Saturday matchups 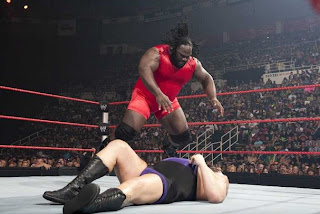 From the Evansville Courier & Press
By Jacob Bennett
Posted January 21, 2010 at midnight

Mark Henry has been The Silverback, The King of the Jungle, Sexual Chocolate.

In an industry dominated by tough guys, Henry, a former Olympic weightlifter, is quantifiably tougher. And at 6-foot-1, 392 pounds, he literally is the biggest reason to attend the WWE Raw Live house show Saturday at Roberts Stadium. He and tag-team partner MVP will take on the team known as Legacy during an untelevised event also scheduled to feature stars such as John Cena, Triple H, Randy Orton and Kofi Kingston.

"They got over on us last time, but we've got big payback planned," Henry said. "Of course we always travel with our divas; there's a six-diva tag-team matchup that you definitely need to see."

Henry, a Texas native, phoned on a day off as he took care of the mundane business that makes up real life in Harlem in New York City, where he now lives.

"I try to get all my necessary stuff done before I get back on the road — laundry, get my hair done, make sure everybody's all right in the family," Henry said. "I'm actually at the hair-braiding place now. They're working on me as we speak."

Henry is one of the longest-tenured wrestlers on the WWE roster, and his in-ring personality has evolved just like the company — from an antagonist to an envelope pusher to the kind of wrestler you could let your kids watch.

Henry was a legend in some circles even before he joined the WWE, as a weightlifting phenom — his raw talent led to all sorts of U.S. records, two trips to the Olympics and anecdotes swapped among other lifters that would sound like fish stories if they weren't true, involving minimal training and even less equipment.

The best evidence of his toughness isn't even his first-prize finish in the "World's Strongest Man" competition at the 2002 Arnold Schwarzenegger Classic. Flex Magazine recently ranked him the second-strongest man who ever lived, based on his lift totals and his claim to being the first guy to ever clean and press with one hand the famed Thomas Inch dumbbell — which weighs 172 pounds and has a bar diameter of nearly 2½ inches.

The magazine said he might have topped the list if he hadn't left the sport in 1996 to join the WWE.

As a wrestler, Henry has been part of tag teams and militant factions. He went through a phase where he called himself Sexual Chocolate, during which he was purported to be a sex addict who was having a baby with Mae Young, who began her wrestling career in 1939.

Henry said he didn't necessarily prefer one gimmick over another.

"I don't worry about all that," Henry said. "I let my actions in the ring take precedence, and that usually is the best policy."

The WWE has dropped racier gimmicks over the last year or so for programs more appropriate for children.

That should help sales of the new line of action figures the WWE is releasing this year with Mattel, which Henry said are the best he's ever seen.

Henry said he didn't get any of the toys in advance, but he planned to get the whole set for his 4-year-old son, including the one modeled after himself. Henry was asked if his son understands what it means to have a parent who also is an action figure.

"This shirt is dry clean only. Which means it's dirty."

Hope that made you laugh. If it did, you can thank comedian Mitch Hedberg for the health benefits.

A handful of people in Evansville are discovering the joys of laughter by getting together once a month and laughing until they stop.

"It is worthwhile," said Maria Venturini, a yoga instructor who leads the laughing meditation. "It's fun. There's no two ways about it. It makes you feel good. It's harmless. It does no harm."

Studies show it does good. Laughter is believed to reduce stress, increase antibodies in the immune system, promote healing and stimulate the brain.

So, when Venturini and four or five clients get together at the Deaconess Health Science Building, lie on a mat and prepare to laugh, then force themselves to laugh for five minutes and then sit silently for five more, they're helping their health.

But that doesn't mean they don't feel self-conscious.

"Sometimes they laugh because they think, 'What if someone's listening to us?'" Venturini said. "'What if my husband knew I was doing this?' It's almost like they're doing something bad. It's really so simple.

"Remember when you were young, and you knew you weren't supposed to laugh, and that makes it even funnier. It triggers memories. Maybe it was a lighter time."

To get in the mood, they'll play a tape of something humorous or bring along a kid. Kids are several times more likely to laugh than adults. Venturini suggests you fake it if you can't make it, but laughter is contagious. Sometimes people can't stop. That's why she tells them beforehand to get up and walk around if they get the giggles.

Then, the silence, and wherever the mind takes them.

"The laughter gets rid of that nervousness and the busyness that we have," Venturini said. "It's easier to be still. Some people say, 'That's the longest five minutes of my life.' Others say, 'That'll be the quickest five minutes of my life.' For some it's really painful to laugh. Sometimes it's difficult to keep it going because they're not, like, 'Is this ever gonna end?'"

Speaking of the end, we want you to think all day about this one from Hedberg:

"Foosball messed up my perception of soccer. I thought you had to kick the ball and then spin 'round and 'round. I can't do a back flip, much less several ... simultaneously with two other guys ... that look exactly like me."
at January 13, 2010 No comments:

Posted July 19, 2006 at midnight (from the Evansville Courier & Press)

Rob Zombie is a sick man.

The campy horror rocker, who was here promoting his album "Educated Horses," announced that he was feeling terrible and that he was on TheraFlu. His (speaking) voice was a little raspy, so he turned over some of the vocal chores to a crowd of almost 2,800.

Otherwise, you wouldn't have known anything was wrong. He moved around the stage like a pro rocker should, even dancing with a 12-foot-tall giant robot, and hit all his career highlights in a show that was about 90 minutes long.

Kicking things off were thrash pioneers Anthrax, touring with the reunited lineup that brought us 1987's album "Among the Living." Zombie and Anthrax mine some of the same territory lyrically - horror stories and comic books, for starters - but their sounds take different highways to hell.

Zombie is creepy in a goofy way. His intro music was the piano theme from the horror movie "Halloween," which he plans to remake next year. His music is Southern rock as played by the family in "The Texas Chainsaw Massacre."

The crowd, half of which was camped on the stadium's concrete floor, knew his whole catalogue, from "Thunderkiss '65" and "More Human Than Human" from his old White Zombie days to his more recent solo stuff, such as "Demon Speeding" and "Foxy, Foxy."

He got to rest his voice during his cover of Metallica's "Enter Sandman" - the crowd had that one covered.

Zombie said he was so ill that he has basically holed up in the Mariott Hotel for the last couple of days. But don't worry too much - he said he plans to live until somebody creates a robot replacement body that he could put his brain in. He told the kids that should be their goal, too.

The verses for both bands were sometimes hard to make out in the stadium, but that's OK; the best hardcore rock relies on earth-shaking grooves, and these guys had those in shovelfuls.

Anthrax thrashed through a furious hourlong set of elephant-stampede drums, airstrike rhythm guitars and sonic boom solos. The self-proclaimed "no-hit wonders" had a bag of fan favorites, including "Indians," "I Am the Law" and "Antisocial."

They finished with "Bring the Noise," their groundbreaking collaboration with Public Enemy, and guitarist Scott Ian (the guy with the raccoon goatee on various VH1 shows) implored the crowd to "give every last ounce" and "leave your feet"-and they stopped playing until everyone did.