That's What I Said: Top 10 Episodes of "The Office" 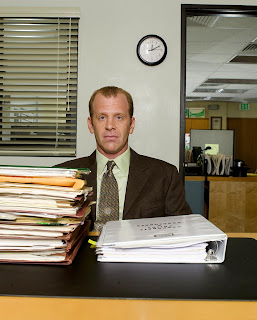 Clearly I put my brainpower to lofty pursuits. In honor of the new fifth-season DVD, I was trying to determine my 10 favorite episodes of "The Office." It was really hard, but this was what I came up with.
1. "The Injury"--Dwight with a concussion, Michael with a foot burned on a George Foreman grill (in bed). The scene where they take Dwight to Meredith's van, and then the ride to the hospital, made me laugh as much as anything ever.
2. "Business School"--Michael's speech is great, the bat is great, and I almost cry every time I watch Michael visit Pam's art show.
3. "Beach Games"--funny episode, but the thing that gets me is Pam walking across the hot coals, and then her big speech.
4. "Office Olympics"--the games are classic ("Flonkerton"), and Michael's buyers' remorse after he buys the condo is classic: "Nobody cares about your stupid beet farm."
5. "Branch Wars"--probably the least realistic good episode of the series, but nothing beats Michael, Dwight and Jim in fake mustaches. Michael is so goofy in this episode, too--love the phone calls he makes to Utica to lure Karen's top salesman, and then when he tries to trade Toby for Stanley ("He's smart, and you can train him...Yech, I can't do it, that was a bluff. Toby is the worst").
6. "Dunder Mifflin Infinity"--two of the best stories of the series--Dwight's John Henry-esque race against the Web site (Angela even breaks his heart at the end!), plus Michael and Dwight trying to win back customers with gift baskets, the perfect gift (except cash baskets).
7. "Casino Night"--Mostly because of Toby's list of reasons why they shouldn't invite a Boy Scout troop to casino night.
8. "The Inititiation"--the deleted scenes actually knock this one into the top 10. Love Ryan's pretend speech to his mom about his 10-year plan as he's walking through the pasture after Dwight abandons him on the farm. Also, the best deleted scene of all time: Michael and Stanley sitting outside together on Pretzel Day.
9. "The Client"--Michael getting drunk with Tim Meadows, then going in with the killer sales pitch = amazing. I believe this is also the one where they act out Michael's screenplay.
10. Ugh, tough call here. I'm gonna go "The Negotiation," where Dwight saves Jim from Roy, and where Michael shares an uncomfortable ride to New York with Toby and Darryl ("It's been a weird day..."). This one barely edges out "Drug Testing," because of Dwight's speech about his ancestors as he resigns after Michael talks him into helping him cheat on his drug test (that was also a great conversation: "Yes, in a cup. We're not animals, Dwight"). Another contender was "Email Surveillance" and the karaoke scene at the end.
My honorable mentions: three episodes of Season 1 ("Health Care," "Basketball," "Hot Girl"), "Sexual Harrassment," "Blood Drive," maaaaybe "Lecture Circuit, Pt. 1," but I need to see it again. Suggestions from facebook included "Diversity Day," "The Dundies" and "Booze Cruise" came up several times.
So, really, this was a top-20 list, a tribute to how good it's been over the years. As my friend Angie put it, "I love this show and all that it is. But at this point I will give you all that I have if you would just get my husband to stop saying 'That's what she said.'"
at September 10, 2009 No comments: